Nashville, TN — 04/13/2012 — Dataium, the largest aggregator of online automotive shopper behavior, today released its monthly ASI report. The ASI (Automotive Shopper Intensity) index, a leading predictive indicator of automotive retail sales showed that March was a great month for automakers with the US Retail SAAR continuing its upward trend. The February ASI report predicted a positive increase in March sales, which was confirmed with March sales figures being the best since 2007. The March ASI also reflects continued sales growth for the third consecutive month. 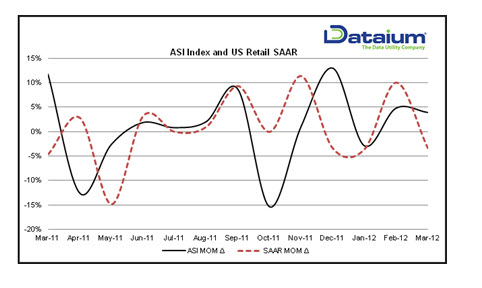 Japanese automaker, Toyota sped past the competition and secured the highest ASI ranking of all makes. Vehicle searches on the brand’s dealership websites rose 10% from the previous month. Domestic manufacturer, Ford also gained a spot to rank second, while Chevrolet closed out the top three manufactures with the highest ranking.

Consistent with the ASI make ranking, both the Toyota Camry and Prius were the highest and second highest ranked new vehicles for the second straight month this year. Nissan's Altima, whose ASI rank fell last month, jumped a few spots in March and landed in the third position. Following close behind were three vehicles from the domestic carmaker Ford, the F-150, the Mustang and the Focus.

Eric Brown, CEO of Dataium remarked, “The first quarter's ASI rankings indicate that 2012 is shaping up to be the year of the fuel-efficient models." He added, "The highest ranking models have tended to be those that offer some of the best fuel economy (highest mpg) in their respective classes.”

Through proprietary data collection and analytics, Dataium aggregates and measures billions of auto shopper behavioral events from a database of over 100 million active auto shoppers across a network of diverse automotive websites. Dataium not only provides data and research on auto shopper/buyer behavior nationally, but by specific makes, models, vehicle segments, and markets, as well. The national report is available for download at dataium.com/library. Dataium reports and dashboards are available on a subscription basis or may be customized to access real-time updates to measure in-market lead behavior, advertising effectiveness, digital marketing performance, and website design proficiency.